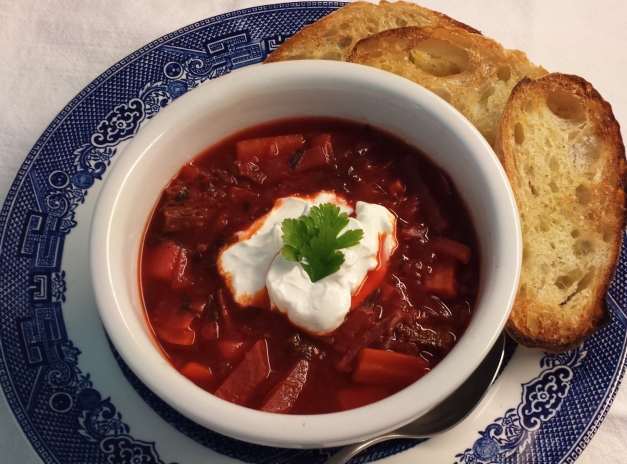 Borscht is a delicious, earthy soup with many variations ranging from heavy to light, depending upon your taste and preference. After testing a number of recipes over the years by far my favorite Borscht recipe is this version shared by a Russian hockey player. This healthier, lighter version tastes incredibly fresh and vibrant, and has the added bonus of freezing very well. This soup can be easily transformed into a vegetarian meal by removing the beef and beef broth, replacing it with vegetable broth if you wish. Enjoy!

Beef and broth: Preheat oven to 350 F. Salt and pepper the chuck roast and brown in a lightly oiled preheated large heavy dutch oven on the stove top until nicely browned. Cover the roast with water just to the top of the meat and bring to a boil. Cover the dutch oven with a tight fitting lid and place in oven, roasting until very tender, usually a couple of hours, or perhaps more depending upon the thickness of the roast. Let cool slightly and remove beef from the broth; cut meat into bite-sized pieces, removing any fat, and return to the broth. – Note: I generally roast the beef the day before and allow the broth and roast to sit overnight in the refrigerator in order to easily skim off any fat.

Preparing the Soup:  Bring broth and beef to a boil on the stove top. Finely mince the parsley stems and add to the broth, along with the julienned beets and chopped potatoes. Add half of the carrots, onions and red bell peppers to the broth, and bring to a low simmer.

In a medium nonstick skillet with a very small amount of oil, sauté the remaining half of carrots, onions, and red peppers for about 3 to 5 minutes. Add the cubed tomatoes and tomato paste and cook for another 2 to 3 minutes. Once the mixture blends together, add to the broth. If necessary, add additional water or beef broth to cover the vegetables.

Cook for 1 ½ hours on low heat, and add salt as needed, along with pepper and cayenne, just to give it a touch of heat. Near the end of cooking, coarsely chop the parsley leaves and add to the broth, along with the minced dill, reserving a few teaspoons of each for serving.

Serve with a spoonful of sour cream (or thick yogurt) topped with a sprinkle of minced dill and parsley. Add a few slices of  warm toasted hearty bread on the side and enjoy!

*If I plan to freeze most of this soup, I sometimes omit the potatoes since they do not freeze as well.